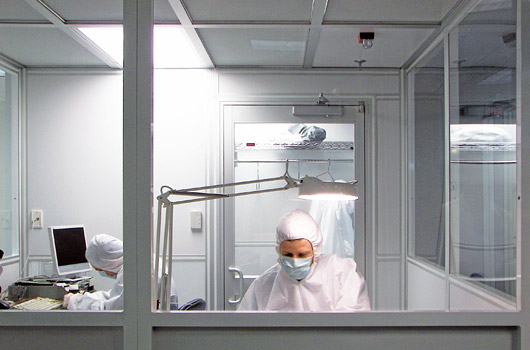 Swift's Class 100 Cleanroom in use, viewed from outside the cleanroom. 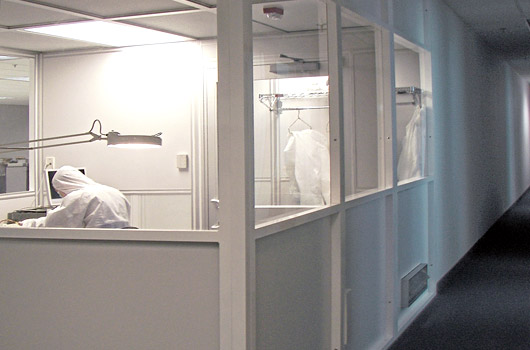 The Class 100 cleanroom viewed from the lobby.

Just about everyone who has worked on a computer has experienced the sick feeling when their computer has died, and with it, weeks, or maybe months of valuable data perhaps irretrievably lost. Enter Swift Data Recovery to the rescue.

Repairing a hard drive requires an artist's sensitivity, an engineer's reasoning, and a technician's dexterity to retrieve anything from valuable accounting data to wedding photos. The data recovery engineer must focus his command of art and technology on a magnetic imprint so small that a particle no bigger than a 5/millionth of an inch can affect whether that imprint's image can ever be brought to light. Such work requires an extraordinary environment with state of the art materials, design and craftsmanship.

Swift contracted Lasco Services of Irving to design, manufacture, and install that environment - a Class 100 Clean Room. Immediately they saw results, according to Don Wells, vice president of technologies. Yield is up 10 percent over their previous Class 1000 cleanroom.

One recovery engineer with four years at Swift, Ray McNutt, described the room as "very state of the art" and said it "works very well."

Time was a major issue with the cleanroom installation. It was going into the new company headquarters, and because of the inevitable delays with leasing, Lasco had only a few weeks to integrate the cleanroom into the space. Installation took only a few days, well within the general contractor's tight schedule.

Also within that time frame, Lasco was able to create and maintain the pressure and environmental conditions required for the delicate work in the cleanroom, by modifying the existing ductwork and controls, thus saving on new HVAC equipment. The cleanroom itself was manufactured from their own Lasco 1751 Wall System and the Lasco T-Bolt Ceiling Grid.

The cleanroom is centrally located so that a glimpse of it is intriguingly noticeable as one walks through the office front door. Just a few steps down the hall brings the entire room into full view. Its good looks complement the office suite, and its high tech appearance reveals and fosters the professionalism that Swift offers. Swift's philosophy is that clients should be able to see for themselves that work is done on-site, in a pristine environment, by qualified professionals. Lasco's specially designed wall units and attention to customer needs made this room the show place and work place Swift needed.